Dogs in Warfare - Through the Ages in Remembrance

Blog Dogs in Warfare - Through the Ages in Remembrance 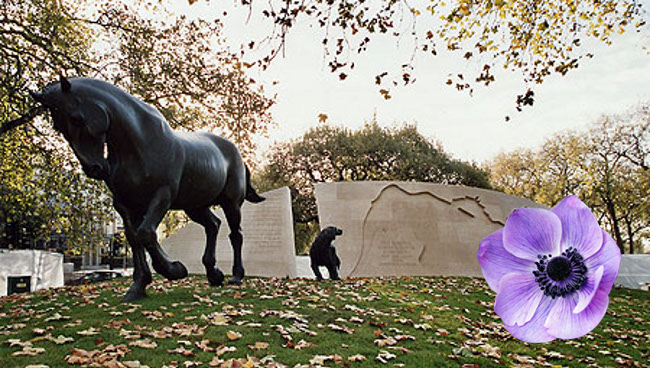 Atilla the Hun used massive Molossian, precursors to the Mastiff, and Talbots, ancestors of the bloodhound, in his campaigns. Understandably if you saw a giant dog running towards you baying for blood you would surrender or at least run the opposite way.

In the middle ages dogs were regularly fitted with armour and used to defend trading caravans. They were also given spiked collars and chain mail armour and sent into battle.

Napoleon even used them at Alexandria, Egypt, as sentries to warn his troops of attack.

In the early 14th Century the French Navy Started using attack dogs in St. Malo to guard naval docks. These were used up till 1770 when unfortunately a young naval officer was killed by one of the dogs.

In the Afghan war in the 19th century there was a dog named Bobbie who was the 66th regiment of foot's mascot. In 1888 Bobbie and his regiment were sent to help friendly tribesmen in putting down a rebellion by Ayun Khan. When they got there it turned out the friendly tribesmen was not so friendly. They attacked the 66th and surrounded them. While most ran away, Bobbie and half of the 66th made a stand. It came down to the last twelve of those who had stayed and the massive Afghan army. Bobbie bit any Afghan who had to come close. Eventually though the twelve were overrun leaving Bobbie as the only survivor. Bobbie then was lost in the desert for days when survivors found him including his injured owner Lance Sargent Peter Kelly. Bobbie was presented to Queen Victoria and given a medal for bravery! Though rather unluckily he was run over by a cab the next year! Now he can be seen stuffed at the regimental museum in Salisbury with an unknown soldier's Afghan war medal.

Dogs were used even in the World Wars. The Germans used dogs to send messages to other trenches. There was one dog that the British couldn't catch so they used a bitch of the same breed to lure it and it actually worked! In world war two, Poland trained their dogs to run under tanks with C4 attached to their backs. The idea was thought to be fool proof and the dogs were sent into battle. Unfortunately the dogs were trained using Polish tanks and instead of going for the German tanks they blew up the Polish ones!

Although dogs have been used so much in the past they are still being used today for a variety of reasons such as detecting IED's, sniffing out contraband and going out on patrol. The breed that is used most often is German Shepherds, but any gun dog and even collies have been known. They are trained from the age of one to three. Dogs in Britain are trained at a special facility in Leicestershire which is one of the world’s best dog training schools. Most handlers and their dogs grow quite a bond and end up staying together when not on active service. Lance corporal Liam Tasker from the royal veterinary corps and his springer spaniel Theo are a great example. The pair were inseparable even until the end. They were both out on patrol north of Nahr-e-Saraj in Helmand province when they came under fire and Liam was shot, he sadly died from his injuries. Theo survived the shooting and stayed by his handler’s side until he died from a fatal heart attack. Liam's family said he died from a broken heart.

All in all, dogs are always a part of our lives whether it be hunting, companionship, lifesaving or serving with our armed forces. Dogs have always been a part of our history and have shown just as much bravery as humans - sometimes even more. They are tied to our history. Dogs really are man's best friend.

Whilst remembering our fallen and wearing your Red Poppy with pride why not consider also wearing a purple Poppy alongside it this year to remember all the animal victims of war.